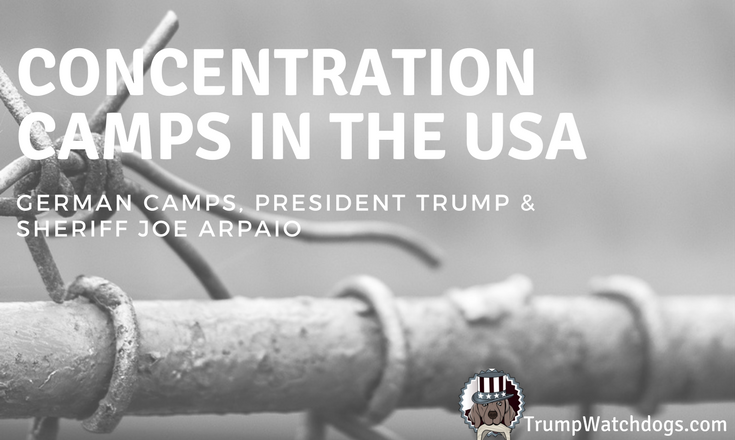 Did you know? Besides killing millions of Jewish people, Romani, homosexuals, and others for being different, the Nazis murdered at least 77,000 members of the German resistance in camps. Many had served in the German military or other government positions.

Here we call attention to modern concentration camps: US detention centers. The focus is Tent City, a concentration camp overseen by former Sheriff Jeff Arpaio in Arizona. Arpaio himself described it that way… But first we refer back to the 1930s because America can learn from Germany’s mistakes.

When Did The Germans Know About Hitler’s Concentration Camps?

The German public knew about German concentration camps starting in 1933. Allied forces did not liberate people from Nazi camps until 1944 and 1945.

Germany’s National Socialist (Nazi) Party set up its first concentration camp pre-war in 1933. This was under the direction of national police director Heinrich Himmler. A March 1933 press release entitled “Ein Konzentrationslager für politische Gefangene In der Nähe von Dachau” described the Konzentrationslager as a place to hold up to 5,000 political prisoners such as Communists and Social Democrats.

So the first Dachau prisoners were held for being opponents of the Nazi political party. An analogy is the Republicans imprisoning Hillary Clinton on Trumped-up charges, and also locking up clergy, journalists, lawyers, professors and others who supported her campaign. In May 1933 the newspaper Dachauer Zeitung described the camp as a boon to the local economy.

Over the next few years newspapers moved from describing Dachau prisoners as political prisoners toward describing them as “race defilers, rapists, sexual degenerates and habitual criminals.”

The Nazis’ description of prisoners was akin to Donald Trump’s description of people from Mexico. In a June 2015 campaign speech, first Trump built distance between his audience and immigrants:

In 1930s Germany the general public was fearful of speaking out. A 1946 entry in the American Journal of Sociology reports that starting in 1935 newspapers advised people to be “dumb.” A jingle from that year translates to “Dear God, make me dumb, that I may not come to Dachau.” Of course, media was increasingly operated by the Nazi government.

When Did Americans Know About The 145° Concentration Camp In Arizona?

The Arizona public knew about Tent City from its start in 1993. The detention center wasn’t shut down until 2017.

Sheriff Arpaio oversaw Tent City detentions from 1993 until 2016. He established Tent City in the Arizona desert in 1993 as an extension of the overpopulated Maricopa County Jail system. Officially it could house 2,400 people. Arpaio built Tent City built with prison labor.

Tent City prisoners weren’t convicted rapists. They were Latinos arrested largely through racial profiling traffic stops that Sheriff Joe Arpaio ordered while working outside of his jurisdiction. These were essentially people suspected and/or convicted of living in Arizona without the required paperwork.  .

Amnesty International in 1997 condemned Tent City as inhumane. Their report also refers to three horrific incidents inflicted by the Maricopa County Jail system more widely in 1996 alone, including the death of one inmate, the near fatal beating of another, and the maiming of a third. Amnesty International also let the world know that Sheriff Joe Arpaio’s incarceration regime did not give female inmates privacy from male guards, and that prisoners were put into chain gangs as laborers. Over 15 years attorney Michael Manning won more than a dozen lawsuits involving wrongful deaths and other mistreatment at Arpaio’s jails in Maricopa County.

Arpaio justified Tent City conditions by comparing them to soldiers’ tent cities in Iraq. One summer day in 2003, Phoenix residents reported that unlit candles were melting in their homes. Dogs’ paws were burning on pavement. And away from the city, the desert burned. Sheriff Joe Arpaio told detainees, “It’s 120 degrees in Iraq and the soldiers are living in tents and they didn’t commit any crimes, so shut your mouths.” One July Saturday in 2011 the temperature in Phoenix hit 118 °F (48 °C). Arpaio found that the temperature inside his Tent City was 145 °F (63 °C). Inmates complained that fans were not working and that their shoes were melting.

Cold temperatures were a problem too. One prisoner reported:

When the temperatures dropped, we were forced to come up with makeshift ways to keep ourselves warm. The showers were kept scalding hot during both summer and winter. We hated to shower, but we would fill our empty water bottles up with the nearly boiling water and put the bottles between our blankets when it was freezing outside. We also would save the plastic bags we found when we cleaned up the jail yard and wrap our feet with them, tucking hot water bottles inside to keep our feet warm while we slept.

Arpaio was censured by a judge (and another judge) for illegal searches and seizures tied to racial profiling. Arizona did not re-elect him in 2016.

Arpaio’s successor, Sheriff Paul Penzone, announced in 2017 that he was closing Tent City. But his justification makes Trump Watchdogs furrow their brows: “This facility is not a crime deterrent, it is not cost efficient, and it is not tough on criminals.” Penzone actually claimed that prisoners preferred Tent City. What does he have in mind? What will President Trump, the GOP and America accept?

Considering somewhat distant history and the present, here are three actions to take.

Now is analogous to when most Germans kept quiet. Our media are canaries in the Trump coal mine.

After opening their first concentration camp, German Nazis consolidated their control over media. This included collecting many hours of video per week, then editing film down to short weekly reports that the government distributed to the masses.

The unethical manipulation of media, including the deployment of pro-Putin bots on social media, shaped the outcome of the 2016 US presidential election.

US journalists now fear for their physical safety. The US President regularly denounces news agencies. He has done so since he started campaigning in 2015. He has publicly portrayed journalists in general as anti-American, as “people who don’t like our country.” He has called them “sick” and “so bizarre.”

Be aware of the past. Trump’s words are the equivalent to 1930s terms like “defective.” These words can be used to justification segregation, imprisonment and death.

If you don’t already support independent news, support it now. Chip in to support a group like NPR, Democracy Now, a printed paper or TrumpWatchdogs.com.

Sometimes no candidate is your ideal. Vote anyway. We don’t have the luxury of idealism now. Vote to keep Nazi sympathizers out of office.

#3: Be Vigilant About US Prisons… And The Wall

Is this a wild prediction? Headline: “Arizona State Prisoners To Build Border Wall.”

Prison labor in the US is shameful. (Trump Watchdogs first became aware of this when a neighbor’s brother, arrested for drug possession, worked for 11 cents per hour.) Today the minimum pay is apparently 16 cents per hour. In early 2017 the National Review described US prison labor as “close to slavery.”

Arizona Sheriff Joe Arpaio made prison labor worse by using chain gangs. In a chain gang, prisoners are chained to each other as they work. (Arpaio also approved of a nonviolent female detainee being chained when giving birth.)

It’s easy to imagine that Mexico will indeed pay for the border wall… with labor provided by incarcerated Mexicans in the US wearing melting state-issued shoes and possibly squatting to give birth. It’s biblically bizarre. And it’s not the America we support.

Trump’s buddy Putin, by the way, uses prison labor from North Korea. Currently political prisoners are building a stadium in Saint Petersburg for the 2018 World Cup.

Maybe one tactic for activists is lobbying against companies that seek to profit from the wall — but backlash hasn’t been a deterrent thus far. Construction of the US-Mexico border wall is now delayed by a court case from an unhappy bidder.

Resistance, what else can we do? Leave a comment below.