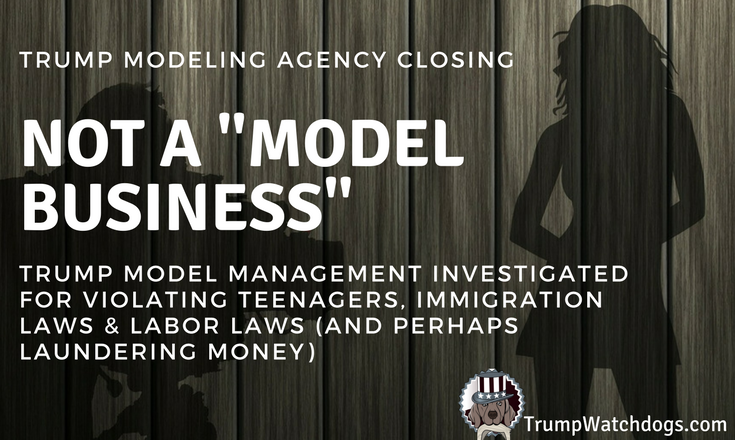 Not exactly a “model business,” Trump Model Management is closing amid increased scrutiny of its relationships with teenage models, immigration law, labor laws and human trafficking.

Donald J. Trump owns 85% of Trump Model Management. He founded the agency in 1999. In April 2017 his financial partners were informed that the Trump modeling agency would be closing. This was purportedly to allow for a deeper focus on golf and Trump hotels — but Trump Watchdogs suspect that the closure relates to questions about Trump Model Management having violated a wide range of laws.

Some key takeaways from this article: Donald Trump appears hypocritical for complaining about illegal immigration. Also, teenagers who are lured to the US to become models — but are coached by agencies to arrive without legal permission to work here — are vulnerable to businessmen’s abusive fantasies.

Some of the girls lured to the US by Trump Model Management were just 14 years old. Some returned home in debt to the agency.

As shown in the video below, in August 2016 the senior Mother Jones correspondent James West told CNN that in his interviews, Trump models who worked from 2004 to 2011 stated that Trump Model Management told them to falsify information on their US visa applications and otherwise flout immigration laws.

Part of the company’s protocol included telling girls and women to travel without their modeling portfolios; they should send these beforehand in order to secure tourist visas. If a customs agent spotted a portfolio, they might be tipped off to the travelers’ intentions of modeling for pay in the US. Former Trump Model Management models have provided visa documents and employment records to back up this claim. Former Trump model Rachel Blais from Canada reports that Trump’s agency was unusual in this regard; others complied with immigration and employment law.

Why Would Trump Sidestep Immigration Laws with Models?

As explained in the Twitterverse:

@harrysiegel
They’d ship in models, Eastern Euro’s who had absolutely no chance of working in NYC. It becomes a debt slavery or fresh meat

As explained by a journalist at DailyKos.com, many young immigrant models live in poverty. They sign disadvantageous contracts that include the obligation to pay high rents for substandard housing. (An example with a paper trail includes Trump model Rachel Blais paying $1600 for a studio shared with five others — while similar units in the area went for under $1400 total.) Over years with the modeling agency, they might net less than $5K although Trump has profited millions from his agency. An excerpt from the DailyKos article:

To get out of the financial crisis, models may be encouraged to provide “additional services” for the men who arranged their housing and modeling agreements.

Incidentally, Donald Trump met Melania Knauss (now his wife) when she was in the US for work with another modeling agency. A friend of Melania reported, “She ran into Donald just at the right time. She was just about out of money, at the end of her rope and about to move back to Eastern Europe.” Melania then briefly worked for Trump Model Management. The Associated Press reported in 2016 that Melania Trump received 10 payments for modeling in the US before she had legal status to work here.

Trump’s agency has also worked with high-paid non-immigrant models such as Carol Alt and Paris Hilton.

Trump told radio host Howard Stern that he noticed Paris when she was 12. “Who the hell is THAT?”

A criminal aspect of the modeling industry — the violations against preteen and teen models — has been on the rise since the 1970s, according to DailyKos, coinciding with the increased sexualization of prepubescent girls and young teens. For instance:

This occurred as modeling management became taken over more and more by “playboy men” such as New Yorker John Casablancas — affiliated with wild parties, rape accusations and suspected murder of models — rather than women such as Eileen Ford, who had looked out for models’ safety.

At his Elite modeling agency Casablancas also started the industry practice of having models be weighed nude, alone except with their agents. In his forties he moved in with a model right after throwing her a lavish Sweet Sixteen celebration. In 2003 Elite went bankrupt after Casablancas was sued for impregnating a 15-year-old and forcing her to get an abortion.

When Donald J. Trump set out to build his empire, Casablancas was among his role models.

Consider the above revelations as they might relate to other disturbing facts about Donald Trump such as:

You can learn more about Trump’s modeling agency and the workers’ living conditions at MotherJones.com.

A final thought: The United States has ample supply of girls and women with modeling potential. We have no need for amateur imports. – Trump Watchdogs

Who is Jeffrey Epstein?