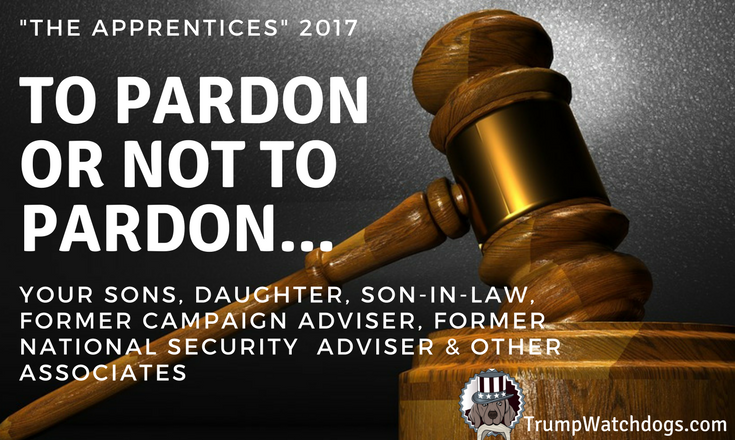 Pardon our Russian, but Trump is focked. As he explores the possibilities of pardoning himself, family members and their associates, he’s learning that pardons have anti-Trump consequences.

What is a pardon? A pardon is a government decision to proceed as if an individual convicted of a crime were actually innocent.

Sometimes innocence is the reason for pardon. For example:

In other cases it seems that a person did commit the crime, but that he or she has already paid their debt to society and should no longer serve prison time, suffer discrimination in the employment market, or bear other consequences of having a criminal conviction.

But sometimes guilt with unpaid debt accompanies a pardon. The government agent in such cases has personal motivations. Enter Donald J. Trump?

What is the downside of presidential pardoning? The main downside is that a pardoned person cannot plead the Fifth Amendment. (The amendment has other clauses, but pleading the 5th means that you won’t be compelled to testify against yourelf.) After all, the 5th gives us the right against self-incrimination, and a pardoned person no longer faces federal legal consequences if they implicate themselves under oath. If they might have “dirt” on another, they can be subpoenaed to share.

Imagine if Trump pardoned his son Donald. Or his son-in-law Jared Kushner. (Or Paul Manafort. Michael Flynn, Carter Page, Steve Bannon or Ivanka?) Anyone in his circle, if pardoned, would then have a greater chance of being called up to testify against him and possibly other associates.

Another risk of Trump pardons is that pardons themselves can be a basis for impeachment. Fordham law professor Jed Shugarman explains that If a president abuses his or her power, that abuse of power could be the basis of impeachment.

6. Can a child be compelled to testify against his or her parent? Yes. As for relatives, only a spouse cannot be legally forced to testify. This is called spousal privilege.

Trump Watchdog Tip: Sometimes it’s worth waiving a variety of “spousal privileges” in exchange for a clear conscience & international heroism.

One Response “The Downside of Trump Pardons”