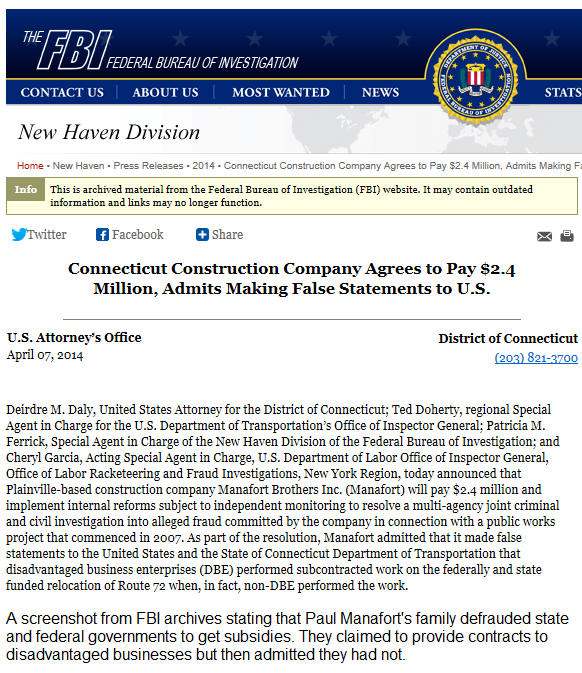 Paul Manafort works as a lobbyist and political adviser. He served as a key adviser to Donald Trump’s 2016 election campaign.

And Paul Manafort advised the former Ukrainian political leader Viktor Yanukovich, who is now in exile for high treason. Yanukovich is pro-Russia. In 2014 the Ukranian government placed Yanukovich on their “most wanted list” for the murder of political protesters.

In 2016 the US government investigated Manafort for having illegally received $12.7 million from Yanukovich’s political party, which is pro-Russia. Federal law requires lobbyists to declare publicly if they represent foreign leaders or political parties and provide detailed reports to the Justice Department. Manafort reportedly sidestepped these obligations and routed money covertly. He then resigned from Trump’s campaign.

A few other questionable characters served by Paul Manafort include leaders of countries with abysmal human rights records, such as Equatorial Guinea (a nation that happens to be very oil-rich). Thus Paul Manafort’s firm was called out by the Center for Public Integrity as one of the top five lobbying firms receiving money from human-rights abusing regimes. Their report was entitled “The Torturer’s Lobby.”

Manafort admitted that it made false statements to the United States and the State of Connecticut Department of Transportation that disadvantaged business enterprises (DBE) performed subcontracted work on the federally and state funded relocation of Route 72 when, in fact, non-DBE performed the work.

Paul Manafort himself is no stranger to construction-related scandal. You can read about his shady HUD-related deal and much more starting with links from Wikipedia.

Related: Who Is Michael Flynn?

3 Responses “Who Is Paul Manafort?”