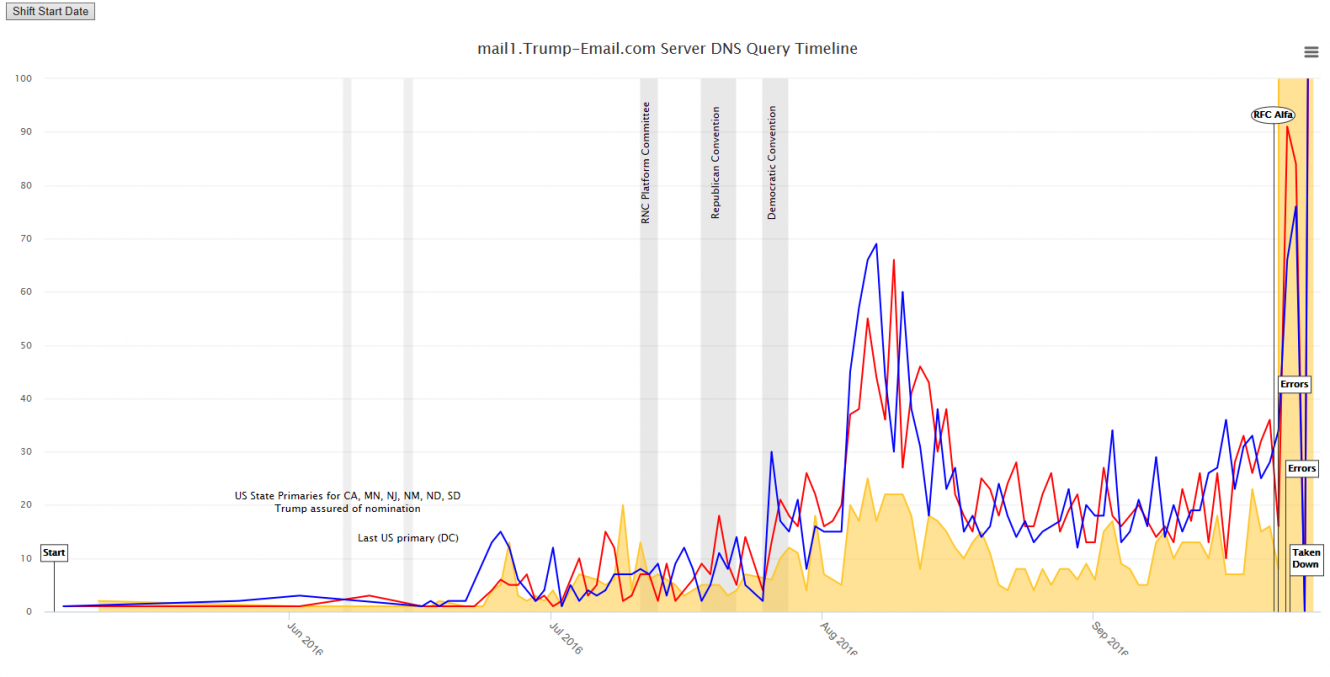 This article is the continuation of Tsar Trump: Old and New Reports Suggest Russia Groomed Donald Trump To Lead US.

While many potential voters were distracted by innuendo about candidate Hillary Clinton’s emails, a small minority were investigating spikes of activity and “quiet periods” involving the Trump Organization’s computer server on Fifth Avenue. The data might be innocuous, but they might show ties between Donald Trump and specific groups seeking to interfere with the US election.

Trump Watchdogs were alerted to the study by a Slate.com story. It mentions a self-described “Union of Concerned Nerds” who were concerned about the DNC email hacking in mid-2016. As one of the nine coders explained, “We wanted to help defend both campaigns, because we wanted to preserve the integrity of the election.”

Hunting for malware in July 2016, one of the computer scientists found what initially seemed to be malware emanating from Russia. Following up though, the team realized that they weren’t observing malware in action, but rather “a sustained relationship” between a server registered to the Trump Organization on Fifth Avenue and two others registered to Alfa Bank. Alfa Bank is Russia’s largest private bank.

As reported by Slate.com, the team found that the Alfa servers were set to communicate only with specific IP addresses. One of the accepted IP addresses was assigned to Spectrum Health, a healthcare organization in Michigan with a tie to Trump’s Cabinet. (More on that below.)

The team that discovered these computer connections hasn’t made bold claims about Russian financing of Trump’s campaign nor any other Russian interference in the 2016 election. One of the computer scientists has posted data sets at http://ljean.com/NetworkData.php so that others can subject the numbers to analysis. (A screenshot is shown below.) When other computer experts learned about the work, they had mixed reactions about whether or not the data are suspicious. Below we consider points from both views. This is not an exhaustive look at the subject, but here we give you a head start on research.

Studying the charts that can be generated, people have attempted to connect the ups and downs with known events. For instance, a contributor to DailyKos.com who presents himself as an astronomer intrigued by “odd periodicities in the data” writes the following about the data and former Trump adviser Carter Page:

“Traveled to Moscow during the week of July 5-9, giving a speech at the New Economic School on July 7th and at its graduation ceremony on July 8th. A significant spike in server activity occurred on July 8-9. On Sep 26 Carter Page took a leave of absence, stepping down from the Trump campaign just three days after the Trump server was turned off and following the second “quiet period” [of server activity].”

Our ears weren’t super-perked until we learned about the CIA task force’s warrant checking out foreign banks potentially in connection with the Trump campaign.

Alfa Bank is the largest private bank in Russia. It serves customers in seven countries including Ukraine.

Pyotr Aven played a significant role in developing the bank. He is an economist who served Vladamir Putin in the 1990s. In the book Putin’s Kleptocracy, Aven is presented as essential to helping Putin evade serious accusations of corruption that might have thwarted his rise to power.

The Denial from Trump’s Team

According to Mother Jones, Trump’s campaign denied having a connection with the Alfa Bank server. The magazine reported in October 2016 that spokeswoman Hope Hicks told Mother Jones:

Hicks’ statement about the computer communications has been proven false, although her inaccuracy doesn’t necessarily imply nefarious activity was afoot. Some people looking at the server files say that Trump Organization’s activity could have been related to marketing emails. If the Trump Organization sent spam to promote Trump Hotels, and an Alfa Bank employee received such spam, that might explain all the data.

On the other hand, the consultant Paul Vixie disagrees. He is a renowned expert in DNS code and a person whose code is central to how the web works. (Until checking him out, we were unaware of the Internet Hall of Fame.) Vixie also serves on the Security and Stability Advisory Committee of ICANN.

“The parties [Trump and Alfa] were communicating in a secretive fashion. The operative word is secretive. This is more akin to what criminal syndicates do if they are putting together a project.”

Shortly after Alfa Bank was made aware of New York Times investigations into server activity, communications between the Alfa and Trump Organizations were terminated. A reporter’s question about why this happened, and why a new Trump server was set up shortly thereafter, was reportedly ignored by Trump’s representative.

Connecting Trump, a Russian Bank and a Michigan Healthcare Company

Next we chased down an answer to the question posed by a writer at Vox.com who thinks the suspicion is nonsense: “If Trump set up a secret hotline to the Kremlin, why would it also be communicating with a random health care organization in Michigan?”

Following the scent of money, we found that maybe the healthcare connection isn’t “random.”

How is Alfa Bank connected to Spectrum Health? Both are tied to the wealthy DeVos family of Michigan. Elizabeth “Betsy” DeVos is Donald Trump’s nominee for Secretary of Education.

The following is taken from DailyKos:

The Devos family founded Amway / Alticor which operates in Russia including transactions with Alfa Bank such as buying insurance for 800 Alticor employees from Alfa Bank’s insurance subsidiary. The Devos family has given millions of dollars in the past few months to conservative super PACs (www.fec.gov). One member of the Devos family was a founder of Blackwater.

Alfa Bank / Alfa Group / LetterOne has expressed interest in investing billions in US health care companies, which could include Michigan’s Spectrum Health or could be regarding the financial relationships Amway/Alticor has with the Russian Alfa Bank insurance company.

The health care company has claimed that “Spectrum Health does not have a relationship with Alfa Bank or any of the Trump organizations.”

Despite the denials, we suspect this server activity highlights a hidden dimension to high-level political decisions about healthcare costs for Americans. Who are the stakeholders?

Update: On January 16, 2017 CNN broke the story that a nominee for Trump’s Cabinet, Rep. Tom Price, invested his own funds in a medical device company and then introduced a law intended to benefit that company.

Chew on all that, fellow Watchdogs! Stay tuned for the next installment of The Watchdog Report.

Kasparov: Putin Is Partners With North Korea In Missiles Against USA, South Korea and Japan

What If Trump Fires Mueller? The 3.5 Percent Rule