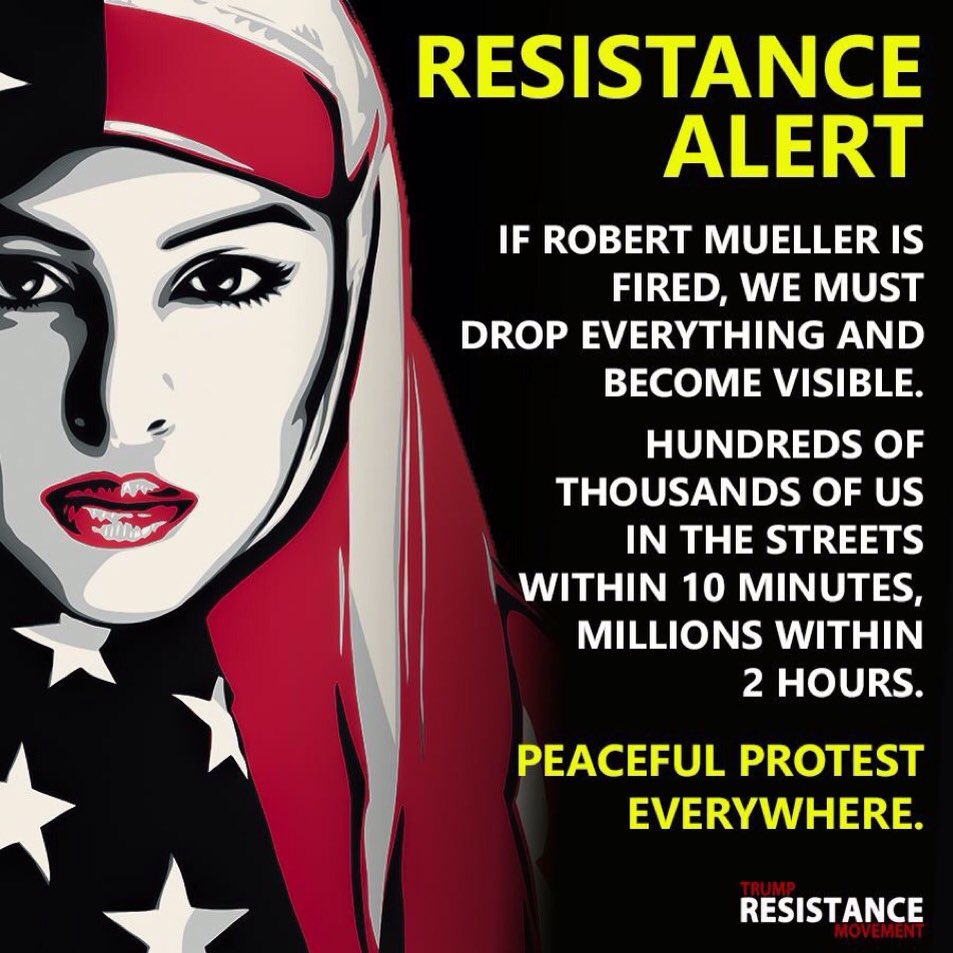 As we write this watchdog report on July 20, Robert Mueller and his team seem too close to truth for (so-called) President Trump’s comfort. The Resistance now must contemplate: What if Trump fires Mueller?

Who is Robert Mueller? Robert Mueller currently serves the US Justice Department as special counsel for the investigation of Russian interference in the 2016 presidential election and related matters. He took over for Senator Sessions, who stepped away from the case because of his own less-than-transparent relationship with Russia.

In an odd legal setup, the President has the authority to fire Mueller and other special counsel. It would make Trump look darn guilty… but presidents have been firing investigators since the 1870s.

Donald J. Trump is now searching for justifications to fire Mueller. In Trump’s view, the “justifications” need only please his base.

Speaking through the New York Times yesterday, Donald J. Trump stated that Robert Mueller would be overstepping his boundaries if he investigated the Trump family’s finances. In Trump’s words, ““I think that’s a violation. Look, this is about Russia.”

Watchdogs point out that Trump’s finances and the Russia investigation are inseparable. For those unfamiliar with this area of thought, we refer you to The Dworkin Report as a useful introduction.

Mueller has not been dissuaded, as reported by ABC News.

#TheResistance Is Preparing… And We Need 11.5 Million

3% of pop protesting can topple a govt
Have a place your groups would meet/protest in the event of Mueller firing
Contact local Indivisibles pic.twitter.com/cuqCLMlrAj

The “three percent” idea is taken from the 3.5% rule of civil disobedience.

Here’s the TED Talk for those with time and interest…

If it’s true that a protest of 3.5% of the population can topple a dictatorial leader, then the US needs a turnout of about 11.5 million if Trump fires Mueller.

Clearly, firing Mueller would not further Trump’s argument of no personal wrongdoing. Keith Olbermann makes this point in the following video. But we imagine that Trump likes the idea of buying time. (He might even manufacture another crisis as diversion.) Also, as Olbermann points out, “looking guilty” hasn’t always dissuaded presidents in the past. We note a couple of examples below.

America’s very first federal special prosecutor, John B. Henderson, was appointed by President Ulysses S. Grant to investigate the Whiskey Ring scandal in 1875. But when the investigation turned to Grant’s own secretary, he fired Henderson for what we’d call a Trumped-up reason.

Get ready to act! You can find local Trump Resistance groups at IndivisibleGuide.com.

3 Responses “What If Trump Fires Mueller? The 3.5 Percent Rule”