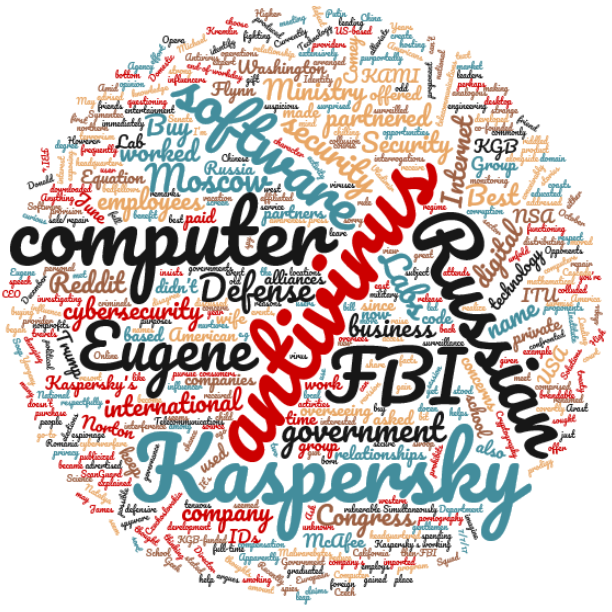 “We discussed fighting terrorism and cybersecurity.”

– Vladimir Putin on his meeting with Donald Trump, 7/7/17, as reported by Sputnik

Kaspersky Labs is a leading provider of antivirus software used in the USA. The company is headquartered in Moscow and led by Eugene Kaspersky.

Who is Eugene Kaspersky? Kaspersky, 51, is a charismatic computer prodigy and a billionaire. He has been welcomed in the US but increasingly draws suspicion. He was educated at a KGB-funded school in his twenties and consults for the Russian Defense Ministry… but Kaspersky has also worked with the FBI. Kaspersky Lab software has been installed for the US Bureau of Prisons and other government agencies.

Kaspersky Labs has business partnerships with Best Buy, Facebook, Microsoft and other leading US companies.

Amid concern about Russian interference in US elections, the FBI is investigating Eugene Kaspersky’s activities and alliances. The FBI’s interest was publicized with a June 28 “swoop” on more than a dozen US-based Kaspersky employees for questioning.

Update: On July 10 the Chicago Tribune reported that US Homeland Security has documents showing Kaspersky Lab as having a Russian military intelligence number assigned by the FSB, Russia’s spy agency.

In May 2017, then-FBI Director James Comey and other leaders in US espionage advised Congress that Kaspersky’s antivirus code was vulnerable to Kremlin influence. However, they did not offer a “smoking gun” that Kaspersky had colluded with the Russian government.

From Eugene Kaspersky’s blog in 2012, addressing an article in Wired

Simultaneously Eugene Kaspersky was hosting an “Ask Me Anything” session on Reddit. There he addressed the claims immediately and offered to meet with Congress. In a May 11 press release he stated, “I respectfully disagree with their opinion, and I’m very sorry these gentlemen can’t use the best software on the market because of political reasons.”

A Reddit user asked why Kaspersky paid Michael Flynn $11,250. Kaspersky explained that the payment was compensation for a speech. Kaspersky Government Security Solutions had paid Flynn the amount in October 2015 purportedly for “making remarks” at an event in Washington.

Kaspersky insists that his company’s work is all defensive, not offensive. He states this boldly on his blog. Recently he offered to share the Kaspersky Labs US source code with the FBI and move more of his work to the USA in an effort to alleviate security concerns.

– A “brandable name” (e.g., Malwarebytes or ScanGuard) or

– A northern European sort of name such as McAfee or Norton

It seemed a bit odd to receive from Best Buy an antivirus program produced by a company with headquarters in Russia, given the tenuous relationship between Washington and Moscow. Russia just didn’t seem like the go-to place for US computer security.

We didn’t yet realize that Avast Software is Czech (and Czechoslovakia is riddled with Russian spies) nor that other antivirus software commonly used in the US is imported from or downloaded from companies based in Romania, China and other foreign locations. What are we thinking, America?!

When US Americans choose antivirus software, it seems most secure to buy American. Leading antivirus providers based in California, for example, are Symantec (Norton Antivirus) and McAfee.

Of course, buying American doesn’t rule out the chance that you’re being surveilled by a government. It just ups the likelihood that the government isn’t foreign. More on that later.

Eugene Kaspersky, or Yevgeny Kaspersky, was born in Russian in 1965. In 1987 he graduated from the KGB Higher School with a degree in mathematical engineering and computer technology. (The school has since been renamed the Institute of Cryptography, Telecommunications and Computer Science.) That same year he met his first wife, also a computer technology expert, at a KGB vacation resort.

Apparently he became interested in computer security in 1989 when confronted with the Cascade virus, which made text fall to the bottom of a computer screen. He sought out more viruses, wrote code to defeat them, and began distributing antivirus software to his friends.

At the time, Kaspersky was working at the Ministry of Defense. An unknown influencer arranged for Kaspersky to leave the military and work in the private sector. Kaspersky moved to the private company KAMI to pursue his antivirus product development full-time.

At KAMI Kaspersky worked alongside his wife Natalya Kaspersky. The two then co-founded Kaspersky Lab with a friend in Moscow in 1997. Eugene has been CEO since 2007. The company employed around 3000 people at our last check.

Kaspersky travels extensively for business. He frequently attends well-publicized entertainment events, and he parties with celebrities. Those who are suspicious of his alliances with the Russian government surmise that while on business, he nurtures old spy relationships to benefit his government.

Eugene Kaspersky and Your Online Identity

Eugene Kaspersky is a proponent of all Internet users having a digital ID. He argues that digital IDs would reduce cyberwarfare.

Opponents raise privacy concerns because the group overseeing digital IDs would be subject to corruption.

Kaspersky is among many Russian and Chinese proponents of changing the governance of the Internet. Currently the ITU — a group of nonprofits with a strong “western” character — oversees domain names and helps keep the Internet functioning. In Kaspersky’s view, the ITU should be comprised of national governments with access to all Internet users digital fingerprints.

The treaty now overseeing international telecommunications is up for possible revision in December 2017.

A word cloud for this Watchdog report

Domestic and international computer surveillance can create strange bedfellows. Here are a few facts to keep in the back of your mind as stories about cybersecurity unfold.

What are your thoughts about Kaspersky, cybersecurity and collusion of all kinds? Comment below.

One Response “Kaspersky Antivirus Software: Made in Moscow, Popular in the USA, and Under FBI Investigation”