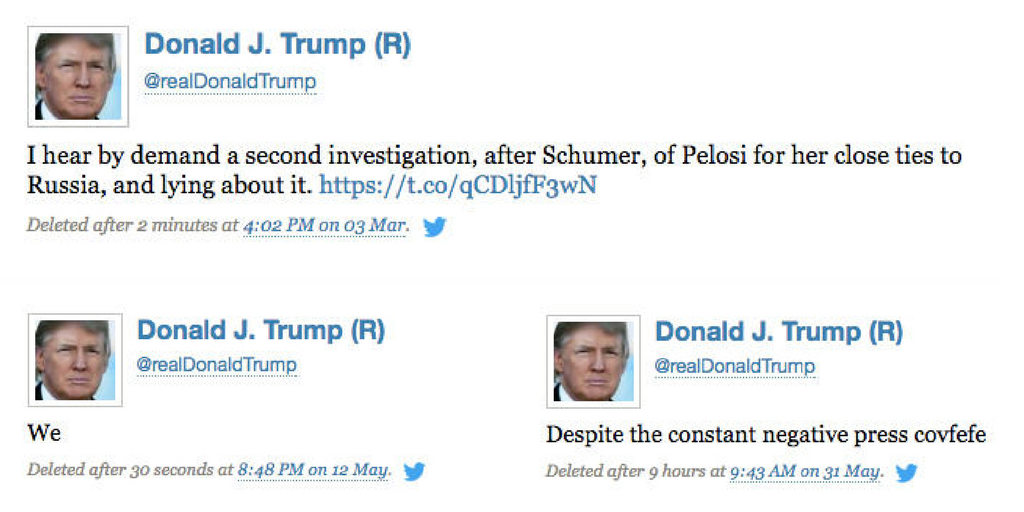 Early Sunday morning before the July 4 holiday, Donald Trump got himself into a pickle. First he tweeted this “fantasy video” in which he physically assaults a CNN journalist.

After sharing this video via his own Twitter account, he retweeted it from the official @POTUS account. Imagine his momentary satisfaction… and the horror he instilled in millions of viewers. The violence. The threat against freedom of the press. The juvenile approach. The apparent insanity.

Just a day earlier Trump had described his Twitter behavior as “modern day presidential.” And on June 29, Trump had tweeted a quote from his spokeswoman Sarah Huckabee Sanders: “The President in no way form or fashion has ever promoted or encouraged violence. If anything, quite the contrary.”

Donny soon deleted his violent video post from the @POTUS record. The deletion could be a violation of the Presidential Records Act.

On June 22 two government watchdog groups filed a lawsuit against President Trump and his executive office. The Citizens for Responsibility and Ethics in Washington and the National Security Archive are concerned primarily with the use of encrypted messaging apps by Trump’s White House staffers, as the apps prevent the archiving of presidential records.

The Presidential Records Act (PRA) states that internal White House communications are subject to Freedom of Information Act disclosure after the president leaves office — five or 12 years later, depending on the content — and they need to be preserved.

As for Trump’s deleted tweets, the lawsuit argues that all statements made by a US president on Twitter are subject to federal record keeping. Therefore when Trump deletes his communications, he is violating the PRA.

Trump has deleted more than 20 tweets since taking office. Some of these deleted presidential records were vaporized for innocuous reasons:

Trump (and America) made light of “covfefe” and “We.” A more concerning tweet was probably deleted for its sentiment, not for the misspelling. Trump deleted it after two minutes:

Also of interest to Trump Watchdogs is Trump’s deleted tweet about Putin and Russia:

In the PRA lawsuit, the watchdog groups highlight a deleted tweet from February 2017. Trump had announced, “Meeting with Generals at Mar-a-Lago in Florida. Very interesting!” He deleted the tweet after 59 minutes, perhaps after being advised that sharing the information wasn’t a wise security move.

The more Trump tweets and deletes, the further he slides ethically, legally and in popularity. July 2nd he virtually bodyslammed free speech. We can only hope he’s beating himself up too.