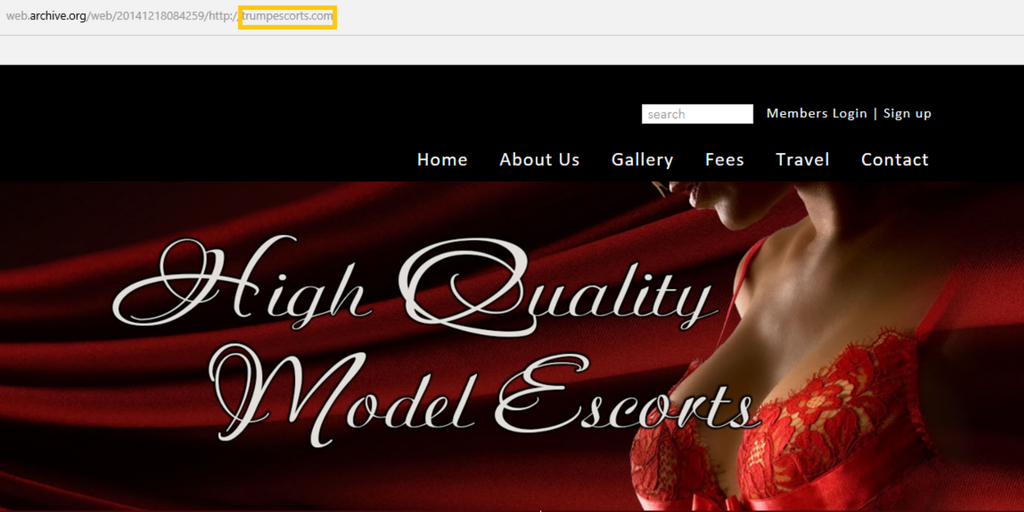 What is an escort service? The current Collins Dictionary definition is accurate while discreetly skirting the scandal:

an agency where people, esp young women, may be hired to accompany someone for entertainment, etc

The final word of “etc” leaves infinite room for interpretation — but in the common understanding, an escort service is essentially a pimp service.

We don’t know whether Donald Trump has owned Trump Escorts or its reincarnation, Mystique Companions. But when Philip Bump reported in his Washington Post article “Solving the Mystery of Trump Escorts” that the web properties haven’t belonged to Donald Trump, he didn’t provide convincing evidence. Maybe more detail from Bump would help… but until that’s presented, we remain on watch for reasons explained below.

Not a Reason #1: Trump Escorts Was Registered To An Australian Company

A map of legal prostitution in Australia

The Washington Post doubted that Trump was connected with TrumpEscorts.com because the website was first registered in 2007 to Bestcom International, a company formed in Australia. Bump wrote,

[T]hat domain is the first sign that Trump Escorts isn’t connected to Trump. It was first registered nearly a decade ago, in October 2007, to a company called Bestcom International, based in Sydney, Australia.

But why couldn’t Trump be involved with an Australian venture? He has enterprises worldwide. And in the early 2000s his first wife Ivana Trump teamed up with the Australian development firm Aquiplan in a failed venture to construct a luxury condo community in Queensland’s Airlie Beach. In the Sydney Morning Herald an Australian property developer suggested that the Trumps were quite familiar with the area:

[Ivana] is right behind us, but she’s also got projects in Costa Rica, Dubai and in Shanghai. She will still have an apartment, but not the super-duper one. Her kids love going to Airlie Beach.

Shown here is a simple map of state-by-state prostitution law in Australia. A businessman interested in running an escort service would be wise to do business from Sydney.

Not a Reason #2: The Mailing Address Was Wrong At SiteJabber

SiteJabber is a wannabe Yelp, a consumer review site. The Washington Post journalist wrote that the NY address for Trump Escorts listed at SiteJabber seemed incorrect:

But Riverside Drive and Riverside Boulevard are not the same address. [It’s] the sort of thing that a random person in, say, Australia, might have seized upon in an attempt to make TrumpEscorts.com look more like a Trump property.

The journalist’s logic is sound except we’re dealing with Donald Trump, not a consistently conscientious businessman. Trump claims to hire “the best people” yet his team has released third-grade level errors time and again. The trouble began with his inaugural poster, which mixes up to and too:

Trump’s team provided the text for this inaugural print. The print or poster is no longer for sale.

If somebody affiliated with Donald Trump mixed up “Dr” and “Blvd,” we wouldn’t be shocked.

Not a Reason #3: Trump’s Lawyer Says So

In 2016 general counsel for Donald Trump told the Post that his client wasn’t involved with TrumpEscorts.com. He stated that the company changed its name under pressure from Trump, who became aware of Trump Escorts in 2015.

Do you believe that Donald Trump and his legal team hadn’t heard of TrumpEscorts.com until 2015? With the website being founded in 2007, these Trump watchdogs find the claim a hard pill to swallow.

To be convinced that Donald Trump isn’t/wasn’t part of the former Trump Escorts, we need to know more about Bestcom International in New South Wales, Australia. We hope that the Washington Post or another journalism source with a budget will follow up… or that someone throws us a bone to be watchdogs fulltime.

We are more interested in Trump Model Management, the New York City modeling agency that Donald Trump definitely operated until it shut down in mid-2017. But investigations into the Trump modeling agency scandal — investigations based on paperwork showing immigration law violations — might lead special prosecutors to Australia. So too might a study of money laundering at Trump’s Taj Mahal casino… So many shady paths for Trump watchdogs to follow!

Do you believe that Donald Trump was unaware ofTrumpEscorts.com until 2015? Leave your comment below.